Last night, we went to our first concert at Rady Shell this summer to see a performance by Steve Martin and Martin Short.  We've recently been looking forward to the second installment of "Only Murders in the Building" which debuts on Hulu next week, and I have to admit that I had forgotten just how funny the Martins can be. 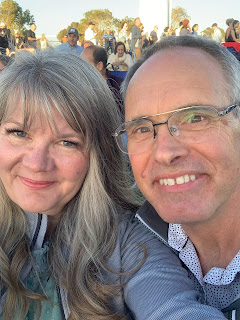 The positive: Steve Martin is 77 years old, looks great, and didn't miss a beat; Martin Short is energetic and no topic was off limits to him, politics, celebrities, religion.  They played well off each other, and we wondered how much was scripted versus how much was improv; we laughed so much that our sides hurt.

This morning, I'm trying to recall a favorite joke but there were so many and the delivery was so fast-paced that I can't remember just one...just that it was hilarious and I will never forget the mash-up of "Jesus Christ Superstar" and "Hair" with Martin Short singing and cavorting about stage in a naked suit.  (Sorry, that's the best way I can describe it!).

Short kept calling the venue "The Randy Shell," and I think that was a joke or maybe he really got the name wrong? There was also a joke in the beginning to please turn off your pager, which hit too close to home as I still had to carry a physical pager for work even just a few weeks ago.

The negative: The show was sold out, and we were packed in tight in the middle of Row Z (the last row) and I had a hard time seeing the stage/screens because we had a tall woman with big hair who was tilting her head to the side for most of the show.  Also, our seat neighbors had obviously pre-gamed quite a bit before the show and reeked of vodka, which they continued to slam back during the show.  Oh yeah, and said woman was also coughing quite a bit and loudly declaring "it's not COVID," so of course, I'll be testing this week to make sure as we have plans in LA next weekend.

It's usually pretty California-chilly at these concerts, located right off the water, but with everyone packed around us, we actually didn't need to use our blanket, but you can see that we're both wearing jackets in the photo. 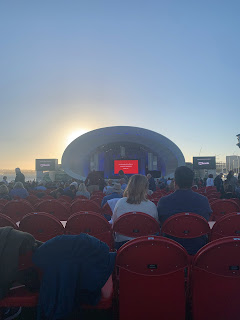 Also, I've noticed a trend for some shows at the shell when "the big act" decides to bring in a band they like to fill some space.  I wonder if they are contracted for a two hour performance but only want to fill half the time.  The group they were promoting was pretty good, and...I really wanted to see more of the Martins, which I guess is actually a positive.

Our next show at the Shell is Boys II Men next Saturday night.  I'm hoping for seats on the lawn instead of seats in the middle so that there's more room for dancing.

Kicking Off a Summer of Fun

June 12, 2022
On Friday night, we kicked off our summer of fun with dinner out in downtown La Mesa.   We're still embracing outdoor dining whenever it's possible, so we headed to Tiramisu Trattoria, which has three or four tables outdoors.   The restaurant has gluten-free options (including pizza and pasta), as well as salads, ravioli and other pasta options, and a good selection of entrees like pollo marsala and sautéed salmon.   I overheard our server telling the family next to us that they are in the process of adding an awning to help block the sun when people are sitting outside.   The food is delicious and the prizes seem reasonable at around $20 per entree.  William had the vegetarian pizza and I had the special entree, shrimp and spinach risotto; we both enjoyed our meals and had enough left over to bring home for the next day.  I believe you could successfully eat here on a keto or low carb diet if you select a salad or one of the fish entrees, like the salmon or maki-mahi.   The r
Post a Comment
Read more