The summer season is officially here.  We kicked off late June and early July by celebrating William's dad's birthday in Los Angeles and spending time with family.

I am thinking that my summer blog will cover June, July, August and September, and if I want to continue blogging this fall, I'll consider October, November and December to be my holiday blog time period, since it kicks off with my birthday and wraps up with New Year's Eve. 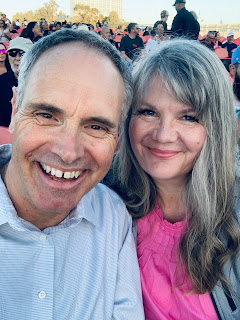 Last weekend, we also attended the Boys II Men concert, our second summer event at the Rady Shell.  The funny thing about this concert is that I knew that this group is acapella, but I didn't know that they would be playing with the symphony.

For some reason, I also thought that this group was more rap/hip-hop and less ballad/slow emotional love song oriented.

If you know me, you know that my favorite songs have a high danceability score and a good beat, so it wasn't exactly what I expected.  I think I will remember this comment for a future blog and use "danceability score" as a criteria for success.

So, yes, we did think there would be dancing, and William even asked our seat neighbors if they planned to dance (they said yes! but no one got up except to do a swaying kind of thing.)

Alas, there was no actual dancing but it was still enjoyable to watch the group; they are all very charismatic on stage, especially the leader, who unfortunately got stung by a bee when on stage (but kept on singing!). The best part of the whole show was when they sang "I'll Make Love to You," and dozens of females rushed the stage as the singers tossed out dozens of red carnations.

We are hopeful for dancing during our next concert, which is Kool and the Gang on July 4.  I'll update our Fourth of July weekend next Monday.  Until then, stay tuned for updates on fashion, lashes, and our thoughts on a no-complaining challenge.