It's been hot and muggy all weekend in La Mesa, so we employed all of our best tactics for staying cool this weekend.

On Friday night (forgot photos!), we went down to Solare in Liberty Station (Point Loma) and had a great seafood dinner outdoors.  It is amazing what a difference 10 degrees in temperature and a nice cool coastal breeze can have on your disposition.  The waitress was awesome and did not push us to hurry up and finish, so we had a nice three hours on the deck and a good conversation that included topics like "it's the people who make the biggest difference in job satisfaction," "on future space flights, how will people like psychologists help determine WHO has the right temperament to join the crew," and "did Garage Sale mysteries jump the shark or are they just hovering over it?"

On Saturday, William spent several hours painting boards for the future permanent yoga dome, and Rachel sat outside under the cheap Amazon mister she purchases and blew through the pages of "Ask For Andrea," which was an amazing find from her psychological thrillers group on Facebook.

I Wish They All Could Be California Girls 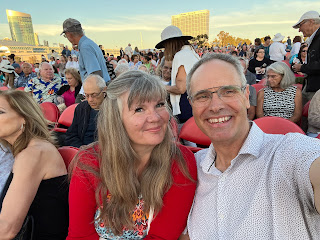 And then we got ready to head downtown to The Beach Boys concert at the Rady Shell, where the temperatures were perfect (yes, I am wearing my red sweater!) and the music was enjoyable, especially the "sing-along" songs like "California Girls" and "Good Vibrations" and "Barbara Ann."

My other favorite song was "Wouldn't It Be Nice" because it reminds me of one of my favorite movies, "50 First Dates."

One of the fun parts about the concert is that they showed footage of The Beach Boys from the 1960's alongside the actual performers, including two of the original Beach Boys who are now 79 and 81. 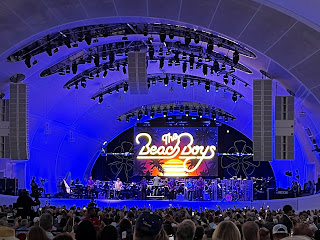 It was also fun to catch all the references to California in the songs, including a mention of La Jolla in one of many surfing songs.

Yes, lots of similar themes: surfing, romance and don't forget the cars!  On screen, they also showed several television shows/movies where The Beach Boys made an appearance or where their songs were part of the show.  However, they didn't include the episode of Home Improvement where the neighbor, Wilson, is part of the Beach Boy family, lol. 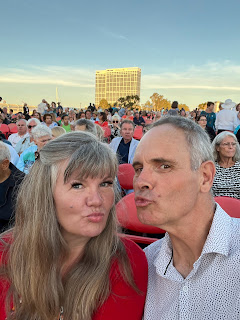 We didn't jump up and start dancing, but we clapped and sang along to the music.

So, a low danceability score but a moderate fun score!

And now a side tangent story.  We usually drive downtown and park because it's cheaper than taking Uber, but all of our favorite parking spots were taken.

We had a choice: $75 parking garage or $50 Uber, so we decided to take Uber to this concert.

Our first driver was running about 22 minutes behind and actually diverted to the airport, so we cancelled that ride and our fare was picked up by A.  I've been in many Ubers, and this was probably the oldest, most falling-apart, smelliest car that we've been in, with probably the second-most stoned driver.

I was very glad to arrive at the venue and exit the experience.  Oh yeah, did I mention that his air conditioner didn't work very well (and you noted, "hot and muggy day" above, right?)

We were hoping for a better experience on the way home.  And we totally got it.  When I got in the TESLA, the driver said, "my last passenger requested that I put the air conditioner on high, so let me know if you get too cold," lol.

One of my favorite sayings is: When you know what you don't want, you know what you do want, and I'd have to say it played out in our transportation tonight. The experience was completely the opposite of our journey to the Rady Shell.  Drive to the event in a $600 car and home in a $63,000 car.