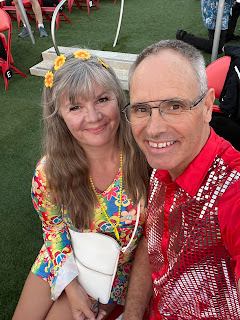 Last night, we headed out to the Rady Shell for the Disco Inferno concert.  We'd already decided to dress up and when we arrived at the venue, we found out that they were having a costume contest.

It was a fun bonus to see how everyone interpreted the 70's disco theme with everything from hippie-ish type prints like on my dress to metallic sparkles like on William's shirt.

One man even wore a helmet that looked like a disco ball, and we saw a group of people sporting pink wigs with headbands and bell-bottomed pants. 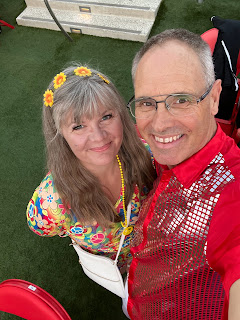 A disco show is a highly danceable event by nature.  One of the ushers, aka the dance police, politely told us that no dancing was allowed in our section!  So we sat down and drank some red wine instead.
"We danced our way into dancing jail then the jail got way over crowded and they let us all out!!! So we could spread and share our dancing joy with everyone," said William.
Once everyone else in the crowd had caught up to our energy, she came over and said, "well, looks like everyone else is doing it, you might as well dance, too!"  At that point, all dance bets were off! 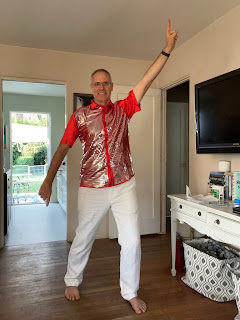 We got our costumes from Amazon, and they fit surprisingly well.

I wore my damp hair in braids all day to get wavy hair; unfortunately, my hair is so thick that when I got home from work, it was still wet.  So, I guess I got the essence of waves, lol.

We were both kind of tired when we got home from work on Friday, but after we put on our costumes and got to the venue, our energy perked up.

My energy type is more on the introverted side, but in a big show like this one, I can pick up a lot of energy from the crowd, as long as William is there to take care of all matters related to my personal safety and security.

We got lots of compliments on our outfits and even one compliment on our dance moves, which were very energetic! I am grateful that in our mid-50's, we have the health and energy to go to a concert and dance as much as the dance police will allow. :)

All of the performances were great, and I even enjoyed listening to the "slow songs" which were performed so well by the symphony and very talented singers.  The first half of the show was over before we knew it, and the second half wrapped up with an energetic performance of YMCA.