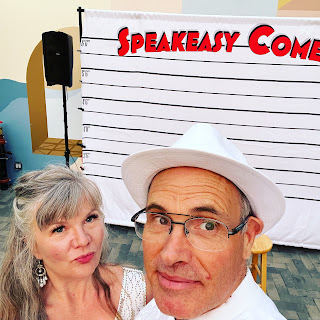 Last weekend, William stumbled across an interesting event on his Instagram: a pop-up speakeasy comedy club in Point Loma at an undisclosed location!

At only $10 per ticket and the opportunity to order a new 20's style dress from Amazon, I quickly said "yes" to attending the event, even though we already have tickets to attend the symphony tonight.

The password to get into the club was "boozehound" but we never had to actually say it.  But it did make me laugh when William sent me the text, so I guess that's good enough.

Keep scrolling down to see more photos and the rest of the story. 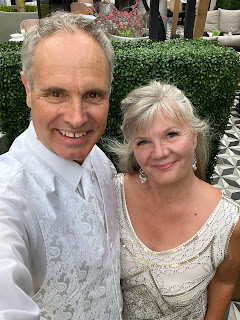 Part of the fun of this type of event, we decided, is the surprise of finding out at the last minute where we're actually going, quite reminiscent of Diner En Blanc (coming up soon!) and also our earlier adventure this year where we "followed the flamingos" to the speakeasy at the Del Mar fair.

The other fun part is getting dressed up and taking fun photos.  William reprised his Diner En Blanc outfit from last year, complete with fedora.  FYI: this is not my Diner En Blanc dress because it's white, GOLD and silver.  For DEB, you can only wear true white with silver accents. 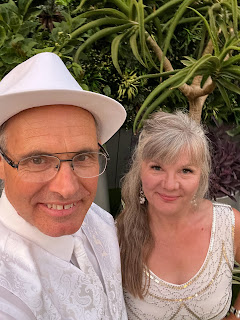 The comedy "club" was in the courtyard of a boutique hotel called the Monsaraz in Point Loma.

Funny thing, I used to live just steps away from this hotel but never even knew it was there!

The venue was super cute, and the in-hotel restaurant, The Westerly, where we enjoyed fun cocktails, red wine, and a really amazing mushroom risotto.

Oh yeah, and they played our song, September, when we were having dinner in the outdoor courtyard!

The performance itself had nothing to do with the 1920s, and we were among a handful of people who dressed up.  We got lots of compliments and William got lightly roasted by two of the comedians who called him "the white suit man."

The comedy ranged from funny & clever to gross & disgusting, but we laughed quite a bit, and it was a fun evening.  Valet parking was available for only $5, which was much easier than finding street parking in this part of town. 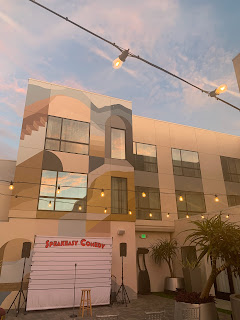