Summer Reading: All Those Wives Upstairs 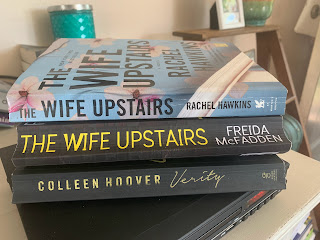 In my Psychological Thrillers group, there are many good book recommendations and also some of the same conversations that happen over and over again.

One of those conversations is about two books, Verity (2018) by Colleen Hoover, and The Wife Upstairs (2020) by Freida McFadden.

Spoiler Alert: Stop reading now if you want to read these books.  And I do suggest that you do.  Buy both of them!  If you prefer a PG version, go for The Wife Upstairs. While you're at it, read The Wife Upstairs by Rachel Hawkins (2020), which is also a great read involving (you guessed it), a wife upstairs!

Which Wife Was First?

Some claim that Hoover stole the idea from McFadden, and others say that McFadden stole the idea from Hoover.  One upset reader said that the two books are exactly the same.  Although Verity was published first, some argue that The Wife Upstairs was written first.

I decided to investigate.  I've read both books in the past, and they didn't seem like the same book to me personally.  I bought a new copy of Verity (V) and I pulled my copy of The Wife Upstairs (W) off the shelf.  And in case you want to know what I think about all these wives upstairs, here you go.

V: Lowen is a writer who is down on her luck and about to be evicted from her apartment.  To prove it, she is on her way to a job interview when a man is run over in the street right in front of her, splattering her shirt with blood.  Jeremy, who turns out to be her interviewer, escorts her to a coffee shop so she can get cleaned up and gives her his shirt.

W: Sylvia is a bartender who is down on her luck and about to be evicted from her apartment.  To prove it, right before her interview, she is at a diner, where she attempts to rescue an older woman who is choking.  After saving the woman's life, the woman throws a couple of coffee on her.  Adam, who will turn out to be her boss, encourages her to get cleaned up and offers to buy her a cup of coffee.

V: Jeremy, via his wife's publishing company, offers Lowen a very lucrative three-book deal to finish the book series his wife (Verity) started before she was injured in a car accident. She can stay at the house while she works on the book.

W: Adam offers Sylvia a free place to live and $6K a month to help keep Victoria company and do some light caretaking tasks.  Of course, she'll stay at the house to take care of Victoria as it's a two hour drive and she doesn't have a car.

V: Verity, the former successful author, is seemingly unable to communicate at all.  She has a 5-year-old son with Jeremy named Crew who is part of the story.  She was in a car wreck.

W: Victoria, the former nurse, can say a few words.  She has no living children with Adam.  She fell down the staircase and lost their pregnancy.

V: Lowen stumbles across an "autobiography" written by Verity, in which the author shares explicit details about her sex life with Jeremy as well as the unthinkable things she did to their twin girls, both who are now deceased.

W: Victoria points Sylvia in the direction of a journal that she's hidden in a drawer.  The journal details how Victoria met Adam, how much she loved him, and eventually begins to reveal his true nature as an abusive husband who may have killed at least one person.

V: Lowen and Jeremy end up sleeping together. Verity knows it and (surprise, she's mobile) scares Lowen when she shows up at the top of the stairs and also locks them in the master bedroom together.

W: Sylvie and Adam end up sleeping together.  Victoria knows it, says "Mine," and also warns Sylvie that Adam will kill her.

"Is the Journal True?"

V: Did Victoria do all the things she wrote in her journal or was it just a writing exercise?  Did she drive her car into a tree or did Jeremy make it seem as if she did?

W: Was Adam an abusive murderer or was Victoria a crazy person who made up everything in her diary?

V: Because Lowen believes all the horrible things she's read in the autobiography, she helps Jeremy kill Verity through suffocation/vomit.  They agree to tell the police that Verity died in her sleep.

W: Because Sylvie believes that the diary entry was made up and that Victoria was the crazy one,  she winds up pushing Victoria down the stairs in her wheelchair.  Victoria dies, and they agree to tell the police that it was an accident.

V: Lowen is pregnant with Jeremy's baby and living a new life with him and Crew when she comes across a letter written by Verity saying that the "autobiography" was just a writing exercise.  Was Jeremy a devoted father or a killer?  We shall never know!

W: Adam is in jail and Sylvie is back with her former boyfriend who saved her from Adam at the end of the novel.  She meets the former housekeeper for lunch, and it's revealed that Maggie knew the truth about Adam.  When Maggie chokes on her food, Sylvie decides not to help her, revealing that she is possibly a murderer, too.