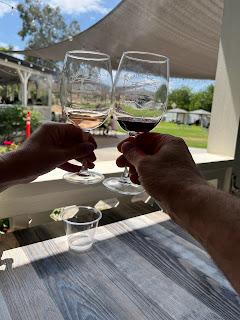 As I've shared here, I've read over 50 books this year and working toward 100+ before the new year.  My favorite genres are psychological thrillers (first) and mysteries (second).  Something happens when you binge watch a television series or read book after book: you start to see patterns.

I've been reading mystery books since I was a little girl and could only check out as many books as I could carry home from the library; today, I order my books on Amazon and have them delivered in one, two or three days.  I'm also a member of a psychological thriller group on Facebook, where I've discovered many intriguing authors, many of whom are recently published.

And that's where I started seeing the word CLOCK used frequently.

No, not as the old mysterious clock hanging on the wall with a secret message inside, but as a verb that means many different things.  I asked William about what he thought the word clock could mean, and we discussed it during our recent winery trip.  For example:

As a writer and a lifelong reader, I am familiar with many words, but the first time I read CLOCK in a sentence where it implied someone noticing something, I thought it was an editing error.  Wait, did he punch the bracelet? No?  Oh, he noticed it.  Because why? Probably he wants to steal it or it's an important clue that will show up later in the story!
I actually went and looked up the word CLOCK used in this manner, and it's not American slang, but it IS British slang.  I do read some British authors, but I think the word has crossed over into psychological thrillers written by American authors.
Or, I guess you could say that I've clocked the word clock across my favorite genre.
P.S.  As I come across the word in the upcoming novels I'm reading, I will edit this blog post with actual examples.
Rock Paper Scissors by Alice Feeney
p. 222: The mousy curls were gone, instead, her hair was styled straight like mine and dyed exactly the same shade of blonde. "Oh," she said, clocking my reaction. "I got my hair done."

Side note: William and I are talking about writing a mystery novel, so we've actually started compiling our own Book of Mystery Patterns, which is a notebook where we list the mystery, the motivation and the suspects in the movies we're watching this summer.