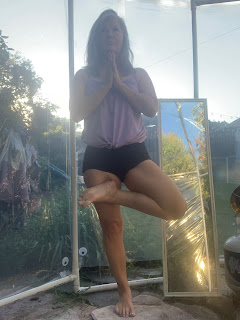 One of the best parts about living in Ocean Beach (2018-ish) was that I discovered that I really loved hot yoga.  It helped that a great hot yoga studio was just a 5-minute walk away from my house, and that I felt very comfortable going there from my first class, which was taught by a new yoga teacher named Ruby.

I would always leave drenched in sweat and feeling happy and accomplished.  During this time, I had a stressful family situation in my life and hot yoga on Tuesdays, Thursdays and Saturdays always provided me with a 90-minute "self-care" break as well as the stress relief I needed to be more present during the times when I needed to be calm.

When I moved to Point Loma, I no longer had the hot yoga studio down the street...and then the pandemic happened so all the studios were closed, anyway.

I met William in July 2019, and when I was ready to start doing yoga again, there were still no yoga studios open.  He had the idea that we could turn La Mesa house into a hot yoga studio. (July 2020)

On my yoga days, he would get home, turn on one or two heaters, fire up a humidifier, close all the doors and windows, and all I had to do was show up and press play on my yoga video. We had to be careful about the appliances we plugged in or we'd trip the circuits in the house and lose power.

The living room yoga set-up was tweaked several times to include William bringing pans of boiling water to the "studio" to try to increase the humidity levels.  At this time, I was doing 3-30 minute yoga classes per week. 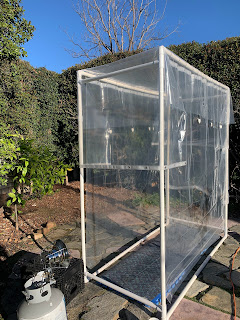 I started watching live yoga classes, streamed in from different states, and noticed that one class was meeting in person but with little yoga cubicles to separate people.

I told William about what I'd seen, and for Valentine's Day that year, he gave me my favorite present ever: a rectangle shaped yoga cubicle crafted from PVC pipes and shower curtains.

The yoga rectangle was too big to keep in the house, so we moved it outside.

I liked my outdoor yoga experience so much that I told William I was also doing to start doing my dance classes outdoors.  (February 2021) 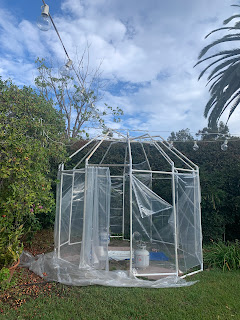 William drew a new design and expanded the yoga rectangle into what I call the Yoga Dome. (March 2021)

It had much more room for me to move around.

He attached a sprinkler to the inside, and we started using 2 "Mr. Heaters" (propane tanks) to see if we could get the temperature and humidity to the level of the OB Yoga studios.  I think the closest I've gotten so far is 102 degrees and 28% humidity; the goal is 95-105 and 40%!

In the early days, he would light the propane heaters for me before he left for work; it would still be dark and a little chilly outside, and all I had to do was grab my thermos of black coffee and find my mat.  About every two weeks, William would exchange the empty tanks for full ones. 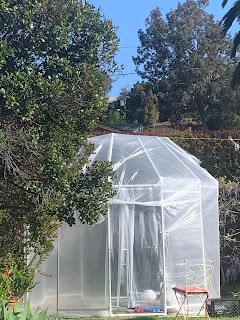 During this phase of the Yoga Dome, we experienced several storms, heat waves and wind so the Dome had to be re-covered more than once with fresh shower curtains and new packing tape.
Also during this time period, I started studying circadian rhythm and decided that it was important to be outside for every sunrise, which inspired me to start spending about 90 minutes daily in the dome.

I eventually learned how to light the propane tanks on my own, and I switched up my yoga routine to include therapeutic movements for my shoulder (now pain free) and strength training.

And then we started discussing making the Yoga Dome a permanent structure, so William drew up a new plan in 2022. 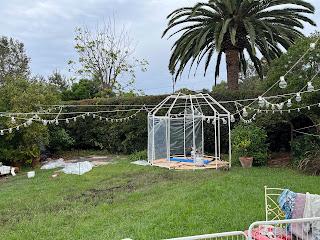 This brings us to this summer (and almost fall!)

All of the wood has been cut, primed, and painted, and we've moved the original Yoga Dome to the middle of the backyard so William can start building the permanent dome.

By moving the original dome over, I will still be able to do my daily practice during the construction process. 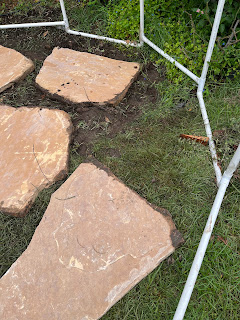 Yesterday, he bought 1,500 pounds of stone to create a floor for Yoga Dome 1.

When the permanent dome is built, we plan to use this section of the yard for a workout station of sorts.

Since the day I started doing yoga outdoors, it is rare that I miss a day.  I didn't realize it, but I've now done yoga consistently since the living room days of July 2020...over 2 years!

Even on the days I had COVID, I would still go outside and just rest on my mat to look up at the clouds and get some fresh air and sunshine.

I am really grateful that William has always been so supportive of making hot yoga an easily accessible and enjoyable part of my lifestyle.

I have seen many beautiful sunrises from within the dome, enjoyed a few rainy mornings and even had a couple of visits from our cat, Hari. 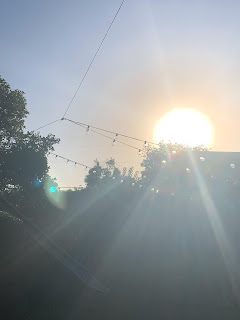 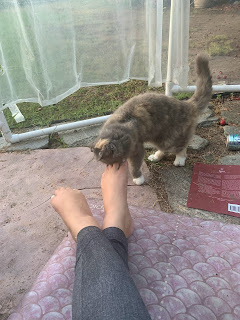